Make This My Location Make a Reservation Here 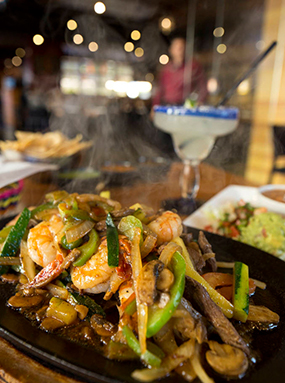 No yellow cheese here — or stiff packaged tortillas, waxy pools of “queso,” salsa from a jar or chips from a bag. Leticia’s Cocina has been eschewing dumbed-down, “Americanized” south-of-the-border food in favor of the deep, earthy and sometimes fiery spirit of authentic Mexican cuisine since 2009 at its original location in the northern valley near Highway 95 and Durango Drive, and that tradition continues at its new spot in Tivoli Village.

Leticia’s has always been distinct from its brethren that rely on prepared foods, doing things the old-fashioned way while pushing the limits of creativity. It was, for example, one of the first restaurants in the valley to serve Mexican street corn, which nine years later has become commonplace. This kitchen, with Mexican-native Leticia Mitchell at the helm, revels in producing fresh flavors and textures, sometimes to a surprising degree.

Spinach-and-mushroom enchiladas ($16), the pliant tortillas wrapped around still-crisp fresh greens and springy mushrooms and smothered in a creamy sauce oh-so-lightly flavored with cheese, have been done before but rarely. And the truly surprising element here was a sort of timbale of chewy white rice, comingled with cheese and strips of roasted mild pepper, then molded and baked to a velvety finish.

Quesa Tacos ($16), proclaimed an award-winner, were indeed unique. Oaxaca cheese had been seared until it had caramelized and browned, then stuffed into tortillas with shrimp cooked in a mild, medium or spicy sauce Leticia named for her grandmother. Numerous meat options and a vegetarian one allow for further customization, and it was served with the baked rice.

Nothing new in fajitas? At Leticia’s they’re co-labeled parilladas, which translates to mixed grill. Carne asada, chicken or shrimp ($19 to $22) were sauteed with crisp-tender strips of zucchini and sliced mushrooms, which provided an earthy contrast to the vegetal notes of the usual tomatoes, green peppers and onions; there’s an all-vegetable option as well ($15). Wheat tortillas on the side were hot, puffy and fitting vehicles for the pastiche of flavors, colors and textures, enlivened further with guacamole and pico de gallo.

Two pork dishes were notable for their contrasts with each other. In the starter of Cochinita Pibil ($9), the meat had been marinated with a hint of achiote, with its mildly peppery flavor, and braised until so tender it virtually melted. The pork was wrapped in soft corn tortillas, drizzled with crema and topped with pickled red onions for a piquant bit of crunch.

In the carnitas ($17), the meat had been roasted until the edges caramelized, providing a gentle crispiness and adding depth to flavors seasoned with garlic and oregano. Guacamole, pico de gallo and fresh lime, plus a far more aggressive crunch in the offbeat use of thick planks of chicarrones, or fried pork skins, added flavor accents.

Another dish that was favored by creative additions was the shrimp jalapeno poppers ($15), with a well-modulated filling of cheese and wrapped in bacon and the fiery peppers, lightly battered and fried. The appeal here was in the literal layers of flavors and textures, tamed by a creamy sauce.

On the other hand, the flan ($5) was as classic as it gets. Good decision; it’s best not to mess with the eggy, caramely goodness of flan.

Like the original Leticia’s, the Tivoli Village location has decor far more sophisticated than sombreros and serapes, painted in a warm palette with accents of wood and stone and some interesting pieces of art, including portraits of Leticia and her mama in the reception area.

It’s a warm, welcoming place. With the exception of a waiter doggedly determined to upsell, the staff was friendly, management vigilant and frequently available to guests. It’s a tenet of Leticia’s, “mi casa es tu casa,” but there are precious few casas or cocinas that measure up.

The essence: Authentic, house-made Mexican food with more than a jot of creativity.